“BP can never pay us back.” That is the one scene — a quote from an Alabama victim of the 2010 British Petroleum (BP) spill in the Gulf of Mexico — that Jennifer Baichwal regrets not including in her new film, Payback. The documentary, based on Margaret Atwood’s Massey Lecture series, Payback: the Shadow Side of Wealth, covers the vast topic of debt.

What the filmmaker did include is remarkable: an endless blood feud between two rural Albanian families; work conditions that border on slavery for migrant tomato pickers; Conrad Black speaking frankly about his time in prison; famed Canadian ecologist William Rees kayaking through Vancouver Harbour, describing our overshooting of the planet’s carrying capacity; and the ecological and social consequences of the BP disaster. 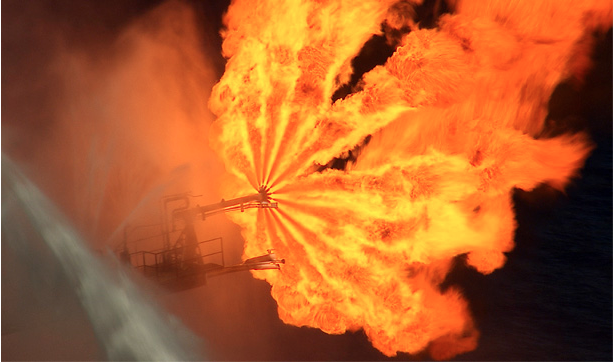 These may seem like unrelated stories. What they all have in common, however, is their contribution to our understanding of debt. Debts of reciprocal violence, debts of consumers to the people producing their goods, debts “to society” owed by criminals and our debt to nature are all discussed in this broad, contemplative film.

“I think that stepping back and looking behind a symbol is . . . interesting and useful,” explains Baichwal.

This was her reasoning, and that of author Margaret Atwood, for avoiding the subject of monetary debt in their respective analyses of the subject, even amid worldwide financial turmoil.

While the book focuses on the mythical, biblical and literary discussions of debt, Baichwal found “real stories that embody the ideas that [Atwood] is talking about. The examples were . . . rooted in real situations that people were living with. I knew I had to begin there, and have concentric circles towards some of the more complex ideas that she brings up in the book. But they’re there, in a different form.”

For example, Baichwal spends part of the movie in the Gulf of Mexico, trying to determine what exactly is owed, and to whom.

“One of the reasons I focused on that in the film is that there’s no language to talk about reparations in that context,” she explains, “and to reduce that idea of reparation to financial language is obscene … It’s not just about environmental justice to me. It’s about social justice.”

Some scenes in Payback are reminiscent of Baichwal’s awe-inspiring, un-narrated 2006 documentary, Manufactured Landscapes. Baichwal shows us where a common agricultural product, tomatoes, comes from, and how consumers owe a debt to the producers of this product.

“Once you witness how those people live, and the way that they work, I don’t think anybody with a shred of humanity could possibly argue against something as basic as the fair food agreement that they are trying to advocate for,” says Baichwal. “These are people who are making a miniscule amount, not even living wages, for backbreaking work. That’s just not okay . . . there is still slavery in the United States.”

Payback tries to simply show the viewer new intellectual ground from which to look at debt.

“What the film does is try to create a space for thinking about something in a way that you haven’t thought about it before, without trying to lead you to conclusions, or advance an argument or interpretation. I just don’t find that worthwhile … I am more interested in asking questions than answering them.”

Baichwal is continuing to ask questions in a new work-in-progress, another collaborative effort with photographer Edward Burtinsky and her husband, acclaimed cinematographer Nicolas de Pencier. They plan to explore “the ways that we have interacted with and shaped water to our needs globally.”

Payback opened on March 16 in select cities across Canada, including Victoria.

View all posts by Jimmy